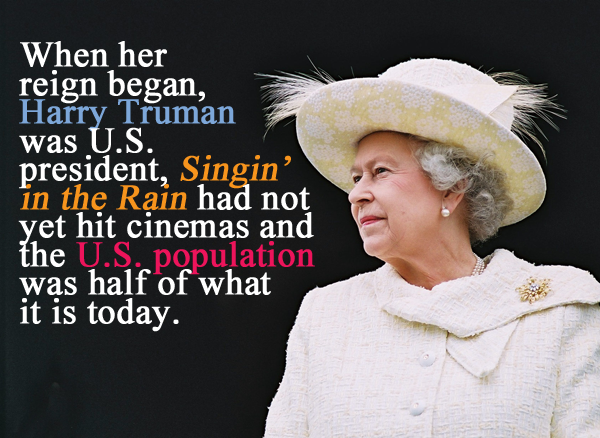 Her Majesty Queen Elizabeth II will today become the longest reigning monarch in British history, surpassing the previous record held by Queen Victoria, who sat on the throne for 63 years and 216 days.

Indeed, in some cases, Elizabeth has far outlasted most of her predecessors. Of the kings and queens that ruled over England, the United Kingdom and/or Great Britain, 23 held the throne no longer than 10 years, while 7 of those—including Elizabeth's uncle, Edward VIII—lasted less than a year.

During the course of her reign, meanwhile, much has changed across the political and cultural landscape of The United States of America. When Elizabeth succeeded her father, George VI, on 6 February, 1952, current U.S. president, Barack Obama, was still nine-and-a-half years away from entering the world, while Elvis Presley was still an undiscovered 17-year-old living in Memphis. And this is just the start of the story.


On the day Elizabeth's reign began (Feb 6, 1952):
1. Harry S. Truman was president of the United States.
2. The U.S. was embroiled in the Korean War.
3. The U.S. consisted of only 48 states; Alaska and Hawaii would not be admitted to the Union for another 7 years.
4. NASA was more than 6 years away from becoming an agency.
5. Albert Einstein, by then a U.S. citizen, was still alive and would be for a further 3 years.
6. The best-selling single in the U.S. was Cry by Johnnie Ray and The Four Lads.
7. Singin' In The Rain would not premiere for another 2 months.

On her 10th anniversary (Feb 6, 1962):
8. John F. Kennedy was president of the United States.
9. The Cuban Missile Crisis hadn't happened yet.
10. Medicare wouldn't exist for another 3 years
11. Marilyn Monroe would still be alive for a further 6 months.
12. The Beatles were 2 years away from their first appearance on The Ed Sullivan Show.
13. Future Guns 'N' Roses front man, Axl Rose, was born on Feb 6, 1962.
14. The book To Kill A Mocking Bird had only been in print for a year and half, while the film version wouldn't hit cinemas for another 10 months.


On her 15th anniversary (Feb 6, 1967):
15. Lyndon B. Johnson was president.
16. Neil Armstrong would not step foot on the moon for another two years.
17. The Green Bay Packers had become the first ever Super Bowl champions just 3 weeks prior.
18. Robert Kennedy and Martin Luther King Jr. were still alive.
19. The Jackson 5, along with star attraction Michael, were unknown.
20. The Graduate had not yet hit cinemas.

Since Elizabeth took to the throne:
45. 12 presidents have occupied the White House. (Note: When the first of these—Harry Truman—was born, Ulysses S. Grant had still been alive).
46. 7 of these presidents are now deceased.
47. The population of the U.S. has more than doubled.
48. The New York Yankees have achieved 13 of their 27 World Series wins.
49. The U.S. economy has been hit by 10 different recessions.
50. Colorized TVs, the cassette player, the VHS, CDs, DVDs, iPods, iPhones and the internet were all developed.

This article was written by Laurence Brown. Laurence is a British expat living in Indianapolis, Indiana, and writes for BBC America and Anglotopia. He is Editor-in-chief of Lost in the Pond and loves nothing more than to share these articles with anglophiles, expats, and other interested parties on social media. Follow Lost in the Pond on Facebook, Twitter and YouTube.