Alan Partridge: A British Comedy Genius Who Has Yet to Crack America 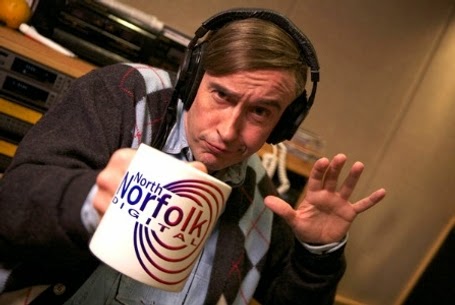 Back of the net! Jackanory! Jurassic Park! Cash back! Smell my cheese!


These phrases are part of my vocabulary and they are due in part to my love and fascination of the man/legend that is Alan Partridge/Steve Coogan.

If I had a dinner party of 10 people, along with Stephen Fry and Rowan Atkinson, Michael Palin and Dawn French, there, at the top of the table, making inappropriate comments to his neighbours and recalling his troubled times in a Travel Lodge and at Radio Norwich, with his over-sized plate piled high, would be Alan Partridge.

I remember sitting in my shared house in London in the late 1990s watching episode after episode of I’m Alan Partridge thinking this was the funniest, most genius thing I had ever seen. I developed a weird crush on Steve Coogan, his creator, since I find a man with a funny bone this big incredibly attractive. Look, the man also created Paul and Pauline Calf, both of which showcase his brilliance!


And, thus, the comedy creation that is Alan Partridge has remained in my heart as his adventures (read as ‘mishaps’) continued. So, it was with much glee that I watched his latest foray into a feature length movie, Alpha Papa, on my birthday last year.  Whilst not much tops ‘Cock Piss Partridge’ graffitied on the side of his car and his ‘Sunday Bloody Sunday’ reference, from his opening sing-along to Roachford’s ’Cuddly Toy’ to the no-trousers scene, the movie did not disappoint.


What struck me is that Alan Partridge is very, very British, not least because of his Norfolk connections and his constant British cultural references. He is a cult in the UK. Here, in the States, I wondered if the Americans would get Alan Partridge. They might know Steve Coogan for the movie Philomena, and possibly Night at the Museum, but how would they take to a man such as Alan, who is so full of inadequacies and flaws, when America generally roots for the tall, handsome real action hero with a heart of gold, which Partridge, quite clearly is not.

Alan is embarrassing, awkward and uncomfortable. And that’s why I like him.

There is much talk that Steve Coogan is Alan Partridge, or has at least morphed into him. The actor admits that Alan is a person that he ‘inhabits’ from time to time, though he also freely admits that Alan is a total ‘buffoon’ (is that a word Americans use?) . So, when I a dreaming of Steve Coogan, am I actually dreaming of Alan Partridge? Who knows!

So, how does the comedy legend translate into the American psyche? What kind of response has there been to the movie? Is it too colloquial? Do Americans need to know the history of Alan to get some of the jokes?

Here are some of the American audience responses to Alan:


‘I do remember thinking that it wasn't bad, just it wasn't for me. I remember a few references that I didn't get that maybe the average British person would and that would also make a difference. I know a lot about British pop culture, but any references to any radio stuff pretty much goes right past me.’

I've only seen him in Mid-Morning Matters and it was amusing but this is the feeling I had - that I was missing too much of the backstory.’

‘I think the often obscure references and the fact that the character appeared 22 years ago in 1991 and has a considerable backstory, doesn't make him the easiest character to get into for someone outside the UK, even though the quality of the comedy has been very consistent (though for my money the best Partridge was the first series of I'm Alan Partridge in 1997 - which was also the series that really made Partridge as a legendary UK comedy character).’

I think Alan Partridge really works best if you've seen his career from the early days, from sports reporter, to prime-time chat show host (where he accidentally killed a guest live on air), to Radio Norfolk's prestigious pre-dawn show, to his current berth at North Norfolk Digital.

And that is why I urge Americans to stop moaning about how crap How I Met Your Mother was (I saw one episode – it sucked) and go back to 1991 and start at the beginning of Alan’s story, and finish with Alpha Papa. Although, I live in hope that Alpha Papa is not the end. I’ll ask Steve if this is the case when he pops round for dinner ;).

Finally, here is a selection of Alan’s wit and wisdom, as only he knows how to impart:


"I don't like big feet. It reminds me of gammon."


"Do you know what this bathroom says to me? Aqua. Which is French for water. It's like being inside an enormous Fox's Glacier Mint. Which, again, to me is a bonus."


"There's never any graffiti in the hotel. Although in the Gents a couple of weeks ago I did see someone had drawn a lady's part. Quite detailed. The guy obviously had talent."


"Two fat ladies, 88! Not that you'd find these ladies at a bingo hall, of course... they're altogether a higher class of fat lady."


"All those people who go around saying “Life begins at forty,” they're notable by their absence. The nerve."


"The temperature inside this apple pie is over 1000 degrees. If I squeeze it, a jet of molten bramley apple will squirt out. Could go your way; could go mine. Either way, one of us is going down!"


"All this wine nonsense! You get all these wine people, don't you? Wine this, wine that. Let's have a bit of red, let's have a bit of white. Ooh, that's a snazzy bouquet. Oh, this smells of, I don't know, basil. Sometimes you just want to say, sod all this wine, just give me a pint of...mineral water."


"This chemical toilet is a Saniflow 33, now this little babe can cope with anything, and I mean anything. Earlier on I put in a pound of mashed up Dundee cake, let's take a look...not a trace! Peace of mind I'm sure, especially if you have elderly relatives on board."


"Hi Susan. I was a bit bored so I dismantled my Corby Trouser Press. I can't put it back together again. Will that show up on my bill?"


"Guide dogs for the blind. It's cruel really, isn't it? Getting a dog to lead a man round all day. Not fair on either of them."


"If you see a lovely field with a family having a picnic, and a nice pond in it, you fill in the pond with concrete, you plow the family into the soil, you blow up the tree, and use the leaves to make a dress for your wife who is also your brother."


On the frailty of the human body:


"Got my fungal foot powder? Ah, it's a lifesaver, you know. I'd effectively be disabled if it weren't for these."


"Right, dry skin cream. I'm having an attack of the old flakes again. This morning my pillow looked like a flapjack."


"Dan's a fantastic man! He really is. I was talking to him early and he asked me what kind of phone I had and I said a Motorola Timeport. And he said, 'that's saaad, you want to upgrade'. I said, so do you - to a new face. He nearly soiled himself! He said he was laughing so hard he had Kenco coming out of his nostrils, and that made me laugh. But...my nostrils were clear."


"Convoy? Michael, you're hanging around with a man who uses a collective term for a single vehicle."


"Bucktoothed simpletons with eyebrows on their cheeks... horses running through council estates... men in platform shoes being arrested for bombings... badly tarmacced drives... in this country."


"Hello is that Curry's? I'd like to place an order for two supplementary, auxiliary speakers, to go with my Midi Hi-Fi system, apropos achieving surround sound. 'Apropos'...it's Latin. You ought to have a basic grasp of Latin if you're working in Curry's."


On law and order:


"Jet from Gladiators to host a millennium barn dance at Yeovil aerodrome. Properly policed. It must not, I repeat not, turn into an all-night rave."


"Sunday Bloody Sunday. What a great song. It really encapsulates the frustration of a Sunday, doesn't it? You wake up in the morning, you've got to read all the Sunday papers, the kids are running round, you've got to mow the lawn, wash the car, and you just think 'Sunday, bloody Sunday!'"


"Actually the best thing I did, was to get thrown out by my wife. She's living with a fitness instructor. He drinks that yellow stuff in tins. He's an idiot."


"We're down to the final lather. Just relax; there's a foamy bit on your shoulder - let's make it even more frothy with a squirt of light lemon liquid. Don't you feel good? Careful not to fall asleep and slip under, there's some terrible statistics about that."


"Quick tip for yourself: if you're ever doing an after-dinner speech, you say "My Lords, Ladies and Gentlemen, sorry I'm late, I just popped to the toilet. And while I was there, I saw some graffiti and it said 'I used to be indecisive, but now I'm not so sure.' Straight away you've got them by the jaffas."


"In my mind God made Adam and Eve, he didn't make Adam and Steve."


"I know lying is wrong, but if the elephant man came in now in a blouse with some make up on, and said "how do I look?" Would you say, bearing in mind he's depressed and has respiratory problems, would you say "go and take that blusher off you mis-shapened elephant tranny"? No. You'd say 'You look nice... John'"


"Big Yellow Taxi there by Joni Mitchell, a song in which she complains that they 'paved paradise to put up a parking lot' - a measure which actually would have alleviated traffic congestion on the outskirts of paradise. Something which Joni singularly fails to point out, perhaps because it doesn't quite fit in with her blinkered view of the world. Nevertheless, nice song."

About the author: I'm Claire and I'm a British housewife writing about American bits and bobs. I've lived in Columbia, Maryland for 18 months and I like to write about all the things that confuse, amuse and bemuse me about being in the USA. I like to observe and compare our quirky traits, personalities and oddities because there are many and they are endlessly fascinating. From breaking into mailboxes, to choosing the Spanish option at the checkouts; from polarised poverty and wealth, to getting my head round guns and the glamour of politics; from my mission to crush stink bugs, to the American obsession with pulled pork; and from the wonder that is the PTA, to American attitudes to nudity - I write about it all! You can find my blog at www.ukdesperatehousewifeusa.com