10 British Words for ‘Making Out’ 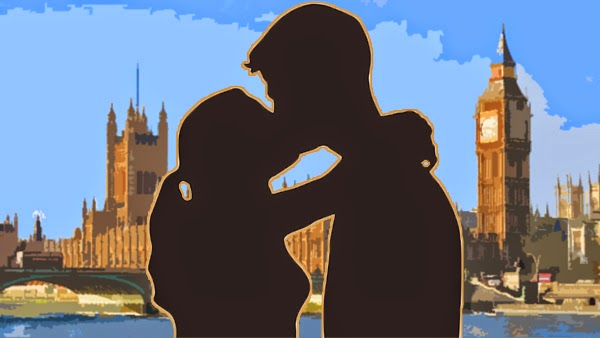 1. Snogging
This is the British version of ‘making out’. Known as being a common term among the Brits, but for Americans it’s like a piece of verbal candy. It is deemed a ‘lusty and hearty’ type of kiss. It’s often performed in night clubs, or in shop doorways, or in town centre bus shelters in the UK after several alcopops have been consumed.

Possible uses:
“Let’s get back to snogging on the sofa, I prefer it over your talking.”
or
“My parents are out, wanna snog?”
or
“Their folks caught them snogging last night. Oooo-er!”

J.K. Rowling used the term in Harry Potter and the Half Blood Prince when Ron says he doesn’t  want to see his sister snogging in public. Oh Ron, get over it!
Snogging is a bit more than kissing, and a lot more than a peck. It’s an act that has been likened to attempting to swallow your partners tongue or eat their face off.
For example:
Person 1: What are you doing to that girl’s face?
Person 2: We are snogging.

2. Copping off
This is more of a West Country term. People would ‘cop off’ with each other at the back of the school bus in the 1980s. Also used in Liverpool, apparently.

3. Necking
Kissing the neck, rather than the lips, most probably. Otherwise it would be called ‘lipping’.
But - some think it’s an old fashioned term used by the older generation to describe the art of snogging (see above), mostly because they are still caught up in the olden days and they are not all up with the new trends like 'snogging' and 'copping off' with each other.
Mother: "Okay, you kids have fun and no necking at the cinema."

4. Walking out
This phrase is used by gentlemen who are taking out gals for dinner and then having a snog every now and then. It’s a gentlemanly way of saying he’s performing the other things listed above, but under the proviso that he’s always taking her out for dinner.

5. Gettin' amangst
This is a Northern or Geordie phrase used to refer to copping off with someone. Goodness, it conjures up all sorts of images.

6. Getting off
A much-used phrase by teenagers is the 1980s and 1990s, akin to snogging.
‘I was getting off with him all night and it was brilliant.’
‘Did you get off with him? He’s lush!’

7. Tonsil tennis
The American version is called ‘tonsil hockey’, but neither involves racquets, sticks, pucks or balls (that I am aware of). Not for the faint-hearted, there’d generally be some heavy kissing action going on here with tonsil tennis.

8. Swapping saliva
Yes, that one needs no explanation. A generous and kind act of sharing, I’m sure.

9. Canoodle
This is probably a bit of hugging and bit of kissing, which makes it sound all rather nice and lovely. Except it’s probably done secretly somewhere, like at the cinema, in the kitchen when your parents are in the sitting room, or round by the bike sheds at school. Canoodling really should be done lying down to reap the benefits of having a lovely warm cuddle too.
‘I love to canoodle with my boyfriend.’

10. Smooch
Smooching is much like canoodling, expect you probably don’t get the cuddling, so it’s not as warm. There’s more of just a lip thing going on with a smooch.
‘Go on, give us a quick smooch.’

What other British words are there for 'making out?' Also, what are your favourite American equivalents? Let us know in the comments below.

About the author: I'm Claire and I'm a British housewife writing about American bits and bobs. I've lived in Columbia, Maryland for 18 months and I like to write about all the things that confuse, amuse and bemuse me about being in the USA. I like to observe and compare our quirky traits, personalities and oddities because there are many and they are endlessly fascinating. From breaking into mailboxes, to choosing the Spanish option at the checkouts; from polarised poverty and wealth, to getting my head round guns and the glamour of politics; from my mission to crush stink bugs, to the American obsession with pulled pork; and from the wonder that is the PTA, to American attitudes to nudity - I write about it all! You can find my blog at www.ukdesperatehousewifeusa.com